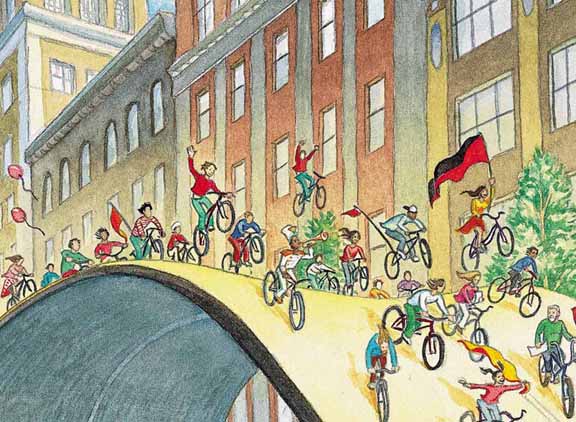 car Short for 'carriage' fr. vb. 'to be carried,' dates to a time when idleness was virtue.

cell phone contact Remote contact between minimasses. For regrouping into one Mass or for route design on the fly. Arranged by exchange of numbers before riding.

clogging the streets 1. Usurpation and desecration of public space aggressively undertaken by short-sighted, profit-crazed corporate planners and their dupes, government officials, and their dupes, traffic engineers, and their dupes, motorists. 2. The occasionally rumored intentional main purpose of Critical Mass. Such ill thoughts can be avoided somewhat by keeping a dense ride so that the group will be clear of any given intersection in a very short time.

confrontation 1. The dynamic that automatically and inherently exists between Critical Mass and a society dependent on cars. 2. The much publicized and unadmired tactic that pits individuals against individuals during a ride, distracting from the beauty of the ride and giving media sensationalists something to bite on.

cops Agents of a false sense of security or false sense of being controlled; sometimes perceive themselves to be in charge of safety, etc., sometimes treated by riders as ride leaders or as targets of abuse, either of which dilutes the ride's power. Best ignored or made irrelevant by keeping mass, corking and other self-guidance techniques.

corking Leaving the flow of the ride for a while to plant your body and bike, in calm posture, a few feet from the front of stopped cars which would otherwise enter an intersection in use by Critical Mass. Best accompanied by smiles and eye contact, or signs that say "Thanks for waiting!" and "Honk if you love bikes!" Corking a thinned out section of the ride undermines its own legitimacy and safety by tempting the aggression of the car drivers being corked, who no longer see a mass of bikes but are still blocked. vb. to cork, n. corker.

Critical Mass 1. Noncommercial, noncompetitive group biking event taking place, since the early 1990s, in a couple hundred cities around the world (often Fridays and monthly). Current and widely known name of the monthly ride formerly known as Commute Clot coined in San Francisco by Dave Snyder, October 1992, from a comment by cargo bike designer George Bliss, in the Ted White documentary film, Return of the Scorcher. (Bliss observed, at an intersection in China, the method of accumulating enough cyclists to push past car traffic.) 2. not capitalized. Threshold quantity of physical (or metaphorical) mass needed to reach a goal unreachable by small parts or quantities. 3. Rider density, group coherence, tightness; the state of having enough bicycles in a given area to negotiate a given traffic situation as one entity. Sometimes shortened to 'mass' as in, "Do we have mass?"

cutting the red When front riders ignore a red light. Dangerous and disruptive for riders near front and causes thinning out, as opportunities to rebuilding mass are fewer.

density The basis of Mass and of mass. Created intentionally over time by use of agitprop describing techniques (see keeping mass, rebuilding mass, thinning out.)

destination 1. Secret that Massers are often rumored to keep even from ourselves. 2. Park, viewpoint or other (preferably large) area which the rotating route designer picks to deposit the riders, ceasing responsibility for the ride's trajectory, after which point anyone who decides to continue their ride is encouraged to use dynamic street smarts to make route decisions.

distraction The bike equivalent of rubber-necking consisting of more people stopping than needed to solve a problem with a maniac. (see escort, swarming).

drive Push with moving force, as in "The profit motive will drive our society to the brink of disaster" or "You drive me to drink."

dynamic street smarts Group decision-making at the ride front concerning such things as "Where the hell do we go now that we've been separated from the group in front of us and we have no route map?!" or "These winter rides are pleasantly small enough to decide the route as we go, so are you too tired to ride to Glen Park?"

escort vb. Help a car out of a spot that obstructs the flow of riders. If you see intentional car-trappers in a testosterone brigade, ask them to ride on and then coax the car out of the Mass in the direction they wish to go so neither car nor swarm blocks our flow. You can yell, "Keep going!" to other riders and then yell, "Homicidal Maniac Driver! Let 'em through!" (You can wink at the car driver for added effect.)

hazardous obstacle! Yelled to indicate a car stuck in Mass created by swarming.

high-five Opportunity on the ride to loop back toward other riders and become what motorists call "opposing traffic" (instead of opposing, we congratulate one another).

ignoring the red Middle and back of the Mass continuing through an intersection despite an unfavorable color emitted by traffic control devices. Keeps a ride safer, gets out of motorists' sights faster. Safest when accompanied by corking. Dangerous if done where ride is thinning out. Not to be confused with cutting the red.

keeping mass Maintaining ride density, our main safety mechanism, and our main P.R. mechanism too, since it gets us through and out of people's way faster. Accomplished by maintaining a very (sometimes frustratingly) slow, leisurely pace so as to ensure the safety of the many riders behind, as they struggle to keep Mass.

leaders or secret leaders 1. You! 2. Anyone who participates—via email on various local discussion lists or in person at the start and end gatherings of rides—in the creation or distribution of agitprop, route designs or strategy on ride particulars. Sometimes, but not often, found at front cajoling the crowd into following a route.

maniac driver or homicidal maniac driver A person in a car pushing through the group of cyclists (see escort).

narrows A space which the ride passes through more slowly, such as an alley, narrow street, or pedestrian passage. To be avoided, except: Can be enjoyable late in the ride, or with only a couple hundred riders, or followed by a stop to rebuild mass.

pedestrians 1. Harried street-crossers whose rights-of-way you should always respect (see courtesy). 2. The wetware of every vehicle: car, bus, truck or bike.

racers 1. People at front who don't stop and look behind them to see that they are getting far out ahead of the Mass. 2. derisive. (see testosterone brigade.)

rebuild mass Build mass again during the ride by diligent use of slow riding, or by asking bikes instead of cars to wait a few light cycles at an intersection now and then so the thinned out (i.e. vulnerable) riders behind them can come together more densely. Best undertaken in a place where the crowd of bikes isn't antagonizing anyone unintended. (see density, regrouping stop).

red light 1. Pretty decoration along the street which it is unsafe for mid-mass riders to heed when traveling as a dense group (see keeping mass). 2. Traffic control device for cars. 3. Convenient place for the front of the ride to stop, for many reasons: so already-moving cars don't have to screech to an angry halt; to keep Mass density; to present a friendly face to the public; to give precedence to a crossing bus; or to hold discussion of route changes after cell phone contact.

regrouping stop A way to express caring and love for the life and limb of those riders behind you (see rebuild mass).

route design The cooperative process of trading off responsibility for thinking about Critical Mass. Sometimes coordinated between interested parties (many of whom can be found on line or handing out agitprop) with intent of minimizing ego and maximizing cooperation, democracy, safety and pleasure for participants (see xerocracy). When designing a route, avoid construction zones or narrows, steep hills, rails, and permanent traffic jam streets where stopped traffic inevitably brings impatience and swarming. After a long downhill stretch or a narrows, plan a location to stop and rebuild mass with a dozen preagreed loud helpers to halt the ride front a few blocks past the narrows spot. Competing route designs are voted on at the ride starting point.

splitting the Mass Getting the back of the group to stop at a red light in a large thinned out group of riders to create safer minimasses.

swarming Surrounding and passing a car stopped at a light, rather than waiting behind it so that it won't obstruct Mass and create unneeded confrontations. Can be fun, but can create safety problems.

take the lane Expand the ride into a lane, dense with cyclists.

testosterone brigade Posturing, aggressive, confrontational riders who forget that the people stuck in cars are not all there by their own free choice. (see also racers.)

thinning out Ride spreading out, usually due to speed of front riders. Opposite of Mass, opposite of density. Bad.

ticket support A "witnessing" activity conducted by a small, mellow and polite group when one of us (often a corker) is singled out by law enforcement for a ticket or finger-wagging. If the face-saving atmosphere is friendly and not many cops are present, this activity can influence an officer not to give the intended ticket.

velorution 1. 'Revolution' as spelled by a dyslexic. 2. quirky pun. A swift change in society brought about by bicycling. Prefix comes from 'velocipede,' an old word for bicycle, from Latin velox, meaning swift (as in 'velocity') and ped, 'foot.'

wait up! 1. Commonly yelled if you want to let front riders know it's time to rebuild mass by stopping and letting people catch up. 2. A request to the group ahead to stop and pull over.

whoop start A simple, loud "WHOOP," meaning "Let's go!" used when the ride front is stopped at a red light and people are too busy socializing to notice the green.

xerocracy 1. Critical Mass's form of self-government. You got an idea? Write it down and pass it out at the next ride. Include your route design suggestions. 2. The method of route design in which the day's route is decided on the basis of who can convince the most people (preferably near the ride front) to follow their map, copied and passed out in the gathering before the ride.